PokerStars PLAY is taking over your mobile devices 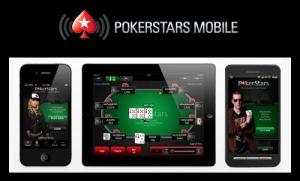 We were all waiting for it and PokerStars.com answered our wishes on this holiday season! The leader of online poker made headlines with an important announcement today. It is launching its PokerStars PLAY App, available worldwide on iOS and Android for your mobiles and tablets. For the poker lovers, who were not aware of the PokerStars PLAY Facebook application, here is a little summary of what it is, as well as what you should be expecting on your mobile and tablet devices!

The PokerStars Facebook App is by far one of the most popular online poker platforms. The application combines the classic aspect of poker with the most modern social features. The player benefits from joint cash access with the free-play on the official operator’s site PokerStars.net. Moreover, the players can make purchases via the application to be able to use gesture-based options to replicate real poker play situation, intended to increase their virtual bankroll.

« David Baazov, the Amaya executive director, who stated that with its vast player database, PokerStars PLAY may perhaps pose a threat to Zynga, who has the upper hand on the social poker marketplace ».

The Facebook App, PokerStars PLAY is a big hit, highly rated and recommended by the online gaming users globally. The players have access to a totally free poker platform that encompasses all the social gaming’s key elements. The users rated the application 4.1 out of 5! Recently, the PokerStars PLAY application was recognized as the Top Social Poker Application during the IGA Gaming App Awards that took place in London!

The benefits of the PokerStars PLAY Facebook App’s mobile version are even greater. Indeed, the application is free to play integrating the in-app purchases’ option to enhance your bankroll. The real life poker gestures are now more realistic than ever. While you had to click on a button in order to state your action, now, you can slide your finger on your screen to move cards and chips on the middle of the poker game room rug. The application is available for players living in Europe, the United States, and Asia. The PokerStars’s Communication spokesperson said it himself: “PokerStars PLAY and Smartphones were meant to merge into one. From now you can enjoy high-quality poker action instantly and wherever you may be. Poker is a fun game; you will be able to sit at a poker table wherever and whenever on your Smartphone.”

PokerStars’ competitors also issued statements following the launch of the mobile application. Among them, David Baazov, the Amaya executive director, who stated that with its vast player database, PokerStars PLAY may perhaps pose a threat to Zynga, who has the upper hand on the social poker marketplace. Moreover, David Baazov also said that: “While virtual money is being offered on this platform of social poker we foresee that social gaming will play a decisive role in the channel’s growth […]Different consumer behaviors are depicted among social players, which translates into various great assets for our customer care services to innovate on.” Everybody seems to be rather enthusiastic about this PokerStars’ initiative, even its competitors, and we are encouraging you to give it a try!