Enter the ‘Zone’ at the Montreal Casino 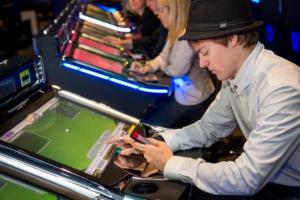 Still not interested in playing casino games? This news article about a new initiative from the Montreal Casino might actually resonate with you! The ‘Zone’, is the name of the brand new virtual casino platform launched by our friends on the other side of the Atlantic Ocean. Considering a decrease in its revenues, the casino decided to reinvent itself by launching a new game arena entirely connected to the latest social media outlets. Follow us for a formal introduction to this new sensation on the Canadian soil!

Montreal Casino went all IN…

Although the cost of this new enterprise was not revealed due to competition concerns, you will be amazed by the casino’s new look. You will be able to benefit from 80 virtual games, displayed on a dozen gigantic screens, flashing lights, and the latest radio hits in the background. This is definitely a hip way to play! No wonder young people from Montreal are rushing to experience the magic of such an infrastructure! The players will be able to share their experience on social media and see their posts appear instantly and live on the big screens. The casino is enhancing the social aspect of the games by encouraging players to play as a group, and on different games at the same time.

The ‘Zone’ concept is not totally new, since it appeared initially in June 2013 at the Casino du Lac-Leamy. The Quebec Casinos Company was delighted to witness the success it encountered and decided to import the ‘Zone’ into its Montreal casino. The ultimate goal of such an enterprise is to open up to the online casinos’ competition, and to offer a safer environment for players to keep control of their gaming tendencies.

« The advantage for a player to play in a group means that if he plays and he loses control, his friends will be there to bring him back to earth. » Steve Watters, a specialist in the psychology of players’ behaviors

Steve Watters, a specialist in the psychology of players’ behaviors depicted a remarkable advantage to the new face of the Montreal Casino, stating that: “The advantage for a player to play in a group means that if he plays and he loses control, his friends will be there to bring him back to earth. It is more difficult for a young man who plays alone in his basement. The risks of getting all caught up in the game are bigger.”

…for a last shot

In a desperate need to appeal to a younger audience, the ‘Zone’, seems to be the last chance for the Montreal Casino to stay in business. Here is a little reminder on the latest technological and economic performances of this well-known Canadian casino.

From April 2014 to September 2014, the casino’s revenues allegedly decreased by 16 million Euros, which represents a total of 58 million Euros less since 2009. Loto-Quebec reportedly invested a total amount of 250 million Euros towards the renovation of the Montreal Casino. Therefore, the ‘Zone’ embodies the last chance for the casino to make a difference in the industry, and to finally make the tables turn.